Nancy Barr-Brandon is a true angel! She is the founder and President of Cat Assistance Network, Inc., a non-profit animal rescue organization located in Monmouth County, New Jersey. She also has been a professional entertainment photographer since 1962 and has many photos of Charlie's Angels.

Nancy also sell photos directly by mail order. Please feel free to contact her at catrescue@monmouth.com for details on her inventory of Charlie's Angels photos. All profits from the sale of my items directly benefit Cat Assistance Network

Farrah Fawcett is featured in this months issue of O magazine along with some other ageless beauties like Jane Fonda, Cheryl Tiegs, and Raquel Welch for having such a great figure, later in life....... She looks great.

Episode:
Donna's (Laura Prepon) fears turn to anger when Eric (Topher Grace) skips town before their wedding, and her mom Midge (Tanya Roberts) comes back to offer her support in the season finale episode titled "The Seekers."

Hope to see Tanya back for more next season.

Both Kate Jackson & Tanya Roberts will be appearing at these upcoming collecting shows.

Adventure Con. (Tennessee)
Date: June 5th & 6th
Cost is $6 daily or $10 for two days and there is a fee for autographs
Where: Knoxville Expo Center, Knoxville, TN
Website: www.adventurecon.com

The ship has sailed and these "angels" are in LOVE. Chico's Angels Episode # 2 "Love Boat Chicas." Someone has been trying to kill Charo and the Angels our hired to go on the Love Boat and find out who. Come join Kay Sedia, Chita Parol, Freida Laye and new crazy cast as we go under the covers and solve our next case. It's a campy DISCO extravaganza and loads of fun, don't miss it.

Chico's Angels is playing once again at the Cavern Club Theater in Casita Del Campo Mexican restaurant in Silverlake, CA. Fridays and Saturdays, April 16 thru May 8 at 9:00pm. Tickets are $17 at the door or $15 with RSVP. Reservations can be made at 323-969-2530 or online at www.cavernclubtheater.com.

Tanya & Aaron on the tube

Tanya Roberts will be on Hollywood Squares the week of May 10-14, www.hollywoodsquares.com . Check your local listings for syndication times/channel.

Wednesday, May 12 at 9pm (est/pst) TV Land  will air TV Land Moguls: The '70s - Part II - featuring Aaron Spelling. This episode will focus on Aaron Spelling and his partner Leonard Goldberg, together they had one of the most prolific and profitable production company's in the 70's. From Charlie's Angels, Starsky & Hutch, to The Love Boat and Fantasy Island.

Jackson & Smith on TV this week

Jaclyn Smith will be on  The District one again as well in an episode "Something Borrowed, Something Bruise" - on May 1, at 10pm (PST) on CBS.

Coming soon and slated for a May 2004 release is a new Lifetime's Intimate Portrait on Farrah Fawcett.  We will update you when we get more details.

Angels -- here is the first look at Season 2 - box cover.

All 26 episodes will be include.  More will be listed soon!

ORDER NOW! From Amazon.com for only $34.99 and FREE SHIPPING!!!
CLICK HERE

UPDATE!  - here is the first look at the inside of the Season 2 box set! 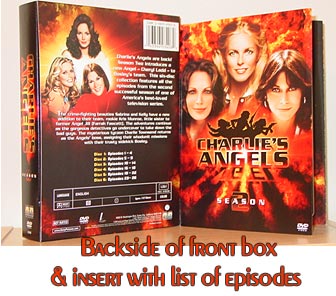 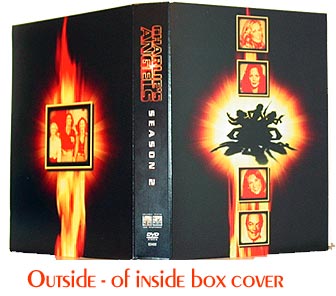 Cheryl Ladd "once an Angel...always an angel" is interviewed in the SPOTLIGHT section of the current issue of Ladies Home Journal (April 2004) -- now on newsstands.

Farrah Fawcett is reported by AP to be producing a new film about a Mississippi children's home. The film is a mix between ``Home Alone'' and ``The Little Rascals.''  No word when if she will be starring in the film or when shooting will begin.

Comedy Central, at 9am (pst) on March 27, they will re-run the Mad-TV episode in which they are at the premiere of the first Charlie's Angels Movie and they briefly interview Jaclyn Smith.

Wednesday, March 24, at 10pm (pst) on TV Land they are airing "All Access Pass II" - which will feature highlights and behind-the-scenes footage from the 2004 TV Land Awards  - no word if Farrah will be seen on the special.

The current issue of People magazine celebrates it's 30th Anniversary.  Inside is full of Angels!  Farrah, Kate and Jaclyn are found inside the pages!  Farrah for her feathered hair, Jaclyn for her sexy jeans and Kate for her timeless attire.

The People magazine is on newsstands now dated: April 12, 2004 and with Jessica Simpson on the cover.

Storyline: Lester Martin (Winkler) is a questionable lawyer who is hired by Bosco (Wiles) to defend his trouble-prone brother. However, when the attorney's daughter is brought into the hospital with bruises on her body, suspicion falls on his wife Jan Martin (Jackson).

Smith on The District - April 24th

Jaclyn Smith will be a new episode of "The District" titled " Ten-Thirty-Three" on Saturday, April 24, at 10pm (PST) on CBS

Angels on the TUBE

Jaclyn Smith's appearance on The District "A House Divided" will re-air TONIGHT - Saturday, April 10, at 10pm (PST) on CBS.

E! is featuring Farrah Fawcett on their 101 Most Starlicious Makeovers on Wednesday, April 14, at 10pm (PST) on E!

Kate Jackson will be appearing on Wayne Brady on Friday, April 16 - check your local listings for times.

Jaclyn Smith is currently "down under" promoting her new bed line available through the Australian department store Harvey Norman.  Smith recently appeared on Australian Today and was asked Smith "What's you secret for looking so beautiful?", Smith replied laughing "sleeping on my King Coil, sweet dream every night".

Angel Fans down under can meet Smith at the Harvey Norman department store located in the Sydney - Thursday 1st April at 6.00pm.

Much heavenly thanks to down-under "Angel" fan - Peter Baine

Don't miss this Love Boat episode which stars the heavenly, Shelley Hack! The episode titled DUMB LUCK, Julie's friend, Carol Ketay (Shelley Hack), a nuclearphysicist, takes the cruise and doesn't attract any men. After Julie gives her some advice, Carol plays it to the hilt and learns a lesson when she meets an attractive man (Kevin Tighe).

This episode of The Love Boat will air on Thursday, April 1st  at 12pm (est/pst) - Please check local listings for actual time in your area.

Kate Jackson also has recently finished a new film tilted No Regrets.   The film has no release date, but will be taken to this years Cannes Film Festival to hopefully find a distributor.  One can visit film website and see exclusive video on Jackson chatting about the project @ http://noregretsmovie.com/

The film is about Alex Wheeler (Robert Merrill), a successful architect, is going to Boston for the annual AIA convention. On the surface Boston seems like any other town, but it’s the city in which Alex’s college love, Suzanne Kennerly (Lari White), now lives...with his former best friend, Phil (Brad Johnson). Although married to Cheryl (Janine Turner) and with two beautiful daughters, Alex is having doubts. Did he marry the right woman? Wanting to repair their broken relationships, the foursome takes a weekend trip where they face the past and confront their true feelings-- hoping to return with No Regrets

This weekend at The Sci-Fi Summit Tanya Roberts will be on hand meeting fans and signing autographs!  The event will be held at the Pasadena Center Fri. Sat. & Sun. MARCH 26 - 28, 2004 from noon to 6pm daily.

Also at the show this weekend is some of the cast of "Buffy", "Star Trek", "The Dead Zone", "Star Wars" and "Harry Potter."  For more details go to: http://www.creationent.com/

In the episode, Ed's (James Cann) thoughts are preoccupied with jealousy and suspicion when he finds out that Jillian (Cheryl Ladd) has been hanging out with the artist playing at the Montecito, Marc McGrath (guest stars as himself, Sugar Ray) and an overzealous agent pesters Mary (Nikki Cox) trying to get her talent-less client a gig at the Montecito.

Check out more photos from the episode:  CLICK HERE

Chico's Angels Episode #1 "All Pretty Chico's all in a Row" is returning for a 3 week engagement March 4th - 20th at the Cavern Club Theater in Casita Del Campo Mexican restaurant in Silverlake, CA.

"Make plans to see this new Angel spoof! I saw Chico's Angels last night...and could not stop laughing!  The story is based on the Charlie's Angels episode "Pretty Angels All in a Row" but this comedy/musical takes the story to a whole new level. The three Angels are flawless, the supporting cast is unstoppable and the writing is witty and snappy.  Oh...and how could I forget the costumes -- which were not only stylish but funny.  Chico's Angels is a heavenly good time! A MUST see for any Charlie's Angels fan! " ~ Mike Pingel, reviewed August 2003.

Kate will be filming an episode of Third Watch in NYC this month.  Jackson has also canceled her appearance at the SUPER MEGASHOW on March 12th, 13th and 14th, 2004 @ in Secaucus, New Jersey. She was unable to move around the shooting schedule for Third Watch.

Farrah Thoughts on the NBC Movie

Farrah Fawcett told EXTRA, after the TVLand Awards her thoughts on the NBC "unofficial" movie.  "There are facts that only certain people know . . .how do they presume to know?" ~ Fawcett

Did they (producers) run the script by Farrah?
"Oh, let me see, did they run it by? I don't think so, No, No, they don't even care what I think!" ~ Fawcett

The TV Land Awards will air on TV Land Wednesday, March 17 @ 8pm.  The host this years is Everyone Loves Raymond's Brad Garrett. This years  honorees include The Mary Tyler Moore  Show, The Andy Griffith Show and Gilligan's Island. For info go to:  www.tvland.com

Associated Press reported that Jay Bernstein is upset with the NBC's 'Behind the Camera: The Unauthorized Story of 'Charlie's Angels.  In the movie's final scene shows him on the streets of Hollywood Boulevard looking overweight in a Hawaiian shirt searching for the next Farrah Fawcett.

Bernstein has threatened legal action if the scene isn't removed, saying it impugns his character and harms his ability to make deals."

Bernstein did served as a paid consultant on the "unofficial" NBC Movie.  He is most known for being Farrah Fawcett's manager during the 1970s.  Do check out Jay's website @ http://www.jaybernstein.com/

The main reason we are not running anything is because of NBC. Bob Meyer of NBC publicity declined my requests for a screener and press kit.   Even after I let them know that CharliesAngels.com gets 53,000-76,000 visitors monthly and that the sites promotes all things related to "Angels". So I then declined NBC with doing any promotion regarding the film on the site.

I'm upset with their decision, but if NBC feels that the site and it's fans are not worthy -- then I don't feel I need to promote a their production.

I have seen the commercial online - and think it will be a film I will LOVE-TO-HATE. I'm sure the fans will find the film without CharliesAngels.com.