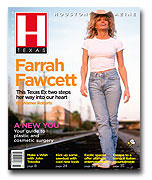 Farrah Fawcett is gracing this months cover of the H Texas Magazine! (Nov 2005)

The article by Warner Roberts follows Farrah's long career and chats with the heavenly angel about her fantastic rollercoaster of a life! To read the story  CLICK HERE 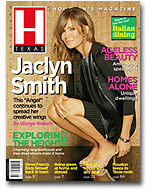 HOT NEWS!!!
We also just found out that Jaclyn Smith did grace the cover of H Texas back in August 2005!!!  You also can buy back issues of her cover!

To buy your copy today!
The back issues, mailed to addresses in the USA., each magazine is $5.00 per copy (includes S & H) and must be prepaid. We accept checks, money orders and all major credit cards (payable to H Texas). Please note you want the Farrah Fawcett Cover.

Any issues requested from outside the will be $5.00 plus postage for the foreign mailing based on where it is going.  All foreign payments must be by credit card. We accept American Express, VISA, MasterCard and Discover.  Credit card payments may be faxed to Cindy Chambers at 281-847-5764.

Golf Magazine has announced the top 100 celebrity golfers.  Cheryl Ladd tied for the 43rd spot with Michael Chiklis from "The Shield."  For the full list go Click Here.

Also running this week on eBay.com, Cheryl has signed a limited-edition, pink leather handbag  which 100% of the final sale price will support Susan G. Komen Breast Cancer Foundation. To check out the "heart" bag  Click Here. 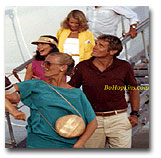 Recently I was able to chat with actor Bo Hopkins who worked on Charlie's Angels not once but twice!  He play Beau Creel in the pilot and came back in the 4 season premiere in Love Boat Angels!  Hopkins not only dated a few of the Angels but even meet his wife on the set!

Find out how heavenly the set was... CLICK HERE!