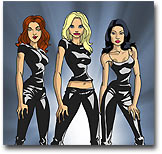 On May 13th, AnimatedAngels.com goes live! The new site will feature the new kick-butt animated adventures of Charlie's Movie Angels. There will be six chapters in all with runs about 2-3 minutes each. This mini-animated movie is a prequel to the summer film Charlie's Angels: Full Throttle In the Animated Series the Angels try to rescue a missing US Marshall.

There will be a new adventure every Tuesday. For more info go to our Charlie's Angels: Full Throttle webpages! CLICK HERE ANGEL.

On Thursday, May 15th 2003 -- the American Heart Association presented Kate Jackson with the "Power of Love" award.  Jackson received the award for her outstanding and tireless work of bringing awareness to heart disease.

"When I think back to all those years on Charlie's Angels and Scarecrow and Mrs. King, The Rookies --  I was running up and down the streets of LA and I had this very serious congenital heart condition -- a hole in my heart,  that I had no idea that it shadowed my every step. As an actress and as a mother and a female person my focus has always been -- outward in direction,  but as a woman and as an advocate for woman's heath, I know now we must all learn to bring that focus inward  as well." ~ an excerpt from Kate Jackson's inspirational speech.

For more photos of Jackson from the event just CLICK HERE!

Ladd's series is picked up for the Fall!

Well, we will be seeing a lot of Cheryl Ladd in her new series Las Vegas.  The new fall season was announced yesterday for NBC and the network has picked up the series for it's new  fall line-up!

The series will air on Mondays at the 9-10pm slot.  Ladd plays the wife of James Caan in the series.

Inside Clips of "Angels Forever"

On the new DVD release of Charlie's Angels: The Complete First Season also holds the documentary film "Angels Forever."  The film features fans of the series and their memories of the Angels.

Also interviewed for the special was Leonard Goldberg (producer of Charlie's Angels) and www.charliesangels.com's very own Mike Pingel.

Each car is 1:64 scale die-cast metal and packaged on a backing card. The new car set is to be in stores June/July 2003.

Mike Pingel has been called a lot of things in his time.. and now a ultimate collector!

Pingel and his Charlie's Angels collection was featured on the HGTV show Ultimate Collectors on Saturday, May 3rd. Plus...check out HGTV.com's webpage on Pingel's Collection. CLICK HERE

Also this month, you can read about Pingel in the current issue of Dolls magazine (May 2003).

Here is the first shot of Jaclyn Smith as she reprises her roles as Kelly Garrett in this summers film Charlie's Angels: Full Throttle. We'll have more photos soon!!!!!

Daily Variety reported this:
NBC has cleared Las Vegas as the title for the hour-long pilot now shooting all over the city. Gary Scott Thompson is exec producer and scripter and says they've received blessings from everyone in town for the show starring James Caan as the surveillance chief, Cheryl Ladd as his wife, model Molly Sims as their daughter and Josh Duhamel as Caan's assistant. The pilot budget is a whopping $5 million, says Thompson.

So why did Aaron Spelling not co-producing the film Charlie's Angels with Leonard Goldberg???

Well, Cynthia Littleton from the Hollywood Reporter recently spoke with Spelling and her is what she reported.

"Spelling also has felt the pinch of the corporatization of Hollywood. Spelling Television's parent company, Viacom, blocked him from taking part with Goldberg as a producer of Sony's big-screen remake of Charlie's Angels (Columbia bought the Spelling-Goldberg library in the early 1980s)."

But don't worry angels.... Spelling still gets a pay check from the films.

Well rumor has it that all three Angels, Farrah, Kate and Jaclyn are sitting together in the audience.  But we at AH could only confirm two angels were at the show, Fawcett and Smith.

Smith on The District Final -TONIGHT!

The District's 3rd season final will be on Sunday, May 18th @ 9pm tilted "Into the Sunset."

Story line; Following Ella's death and his firing, Mannion heads to Arizona for some rest and relaxation. Meanwhile, Sherry arrives in Washington looking for Mannion, only to finally meet Vanessa, who may have evidence that could change Mannion's future. Also, with one of their most-wanted criminals still at large, Debreno worries that Temple may be blurring the lines between cop and vigilante. Also Jean Smart (Designing Woman) guest stars.

Cheryl Ladd's Intimate Portrait will re-air this week on Lifetime as a part of the channel's Happy Mothers Day Month. Ladd's epiosde will air on Wednesday, May 7th @ 7pm


Pingel: The Ultimate Collector!
ON TODAY!!!!

Mike Pingel has been called a lot of things in his time.. and now a ultimate collector!

Pingel and his Charlie's Angels collection will be featured on the HGTV show Ultimate Collectors on Saturday, May 3rd @ 6pm (est)/3pm(pst).

Also this month, you can read about Pingel in the current issue of Dolls magazine (May 2003).


Rare Interview 1977 of Fawcett
This weekend on ET!

Entertainment Tonight: This Weekend will be showing a rare interview of Farrah Fawcett from 1977. The show will also chronicle her roller-coaster life, from her divorce from LEE MAJORS, to the beatings she suffered at the hands of JAMES ORR and the recent news that she has rekindled her relationship with longtime love RYAN O'NEAL.

Entertainment Tonight: This Weekend "TV's Greatest Scandals" airs this weekend (May 3 & 4th). Check your local listings for time and channel.
Meet Tanya Roberts in Person
This Weekend in Chicago

Tanya Roberts will be on hand at the Hollywood Memorabilia & Celebrities Show this weekend in Chicago! Drop buy and meet Charlie's final angel!!!

Two of Cheryl Ladd's past movies which premiered on Lifetime TV are coming to video, The Haunting of Lisa and Her Best Friend's Husband. Once can find these titles on a few obscure dvd websites.

And also just reported by a fellow Charlie's Angels fan that Her Best Friend's Husband can be found at Wal-Mart.

Kate Jackson is on the cover of the current Star (April 15, 2003) with an excusive interview regarding her battle with prescription pills. Jackson talks candidly about her crippling pain and why her son is the reason she is fighting back.

Angels are landing on two TV shows at the end of this month!!!

Cheryl Ladd will make a cameo appearance on Just Shoot Me in an episode titled "Pictures of Lily" on April 22, 8pm NBC

Cheryl Ladd has joined the cast for a new NBC pilot TV show. The series known as Untitled Las Vegas Project (aka "Casino Eye" ) is a one hour drama based on the idea of surveillance experts at a Vegas casino. Co-staring with Ladd is James Caan & Nikki Cox.

Ok...Fawcett fans...in November 2002, Keith Edmier and Farrah Fawcett: Recasting Pygmalion by Lynn Zelevansky will be released!!! The book is a look with photos of Keith & Farrah working on their art together. The book retails for $29.95 but if you pre-order you will get it for $20.97. When you are pre-ordering also check out the additional sneak peek photos on amazon.com. Click To Buy Now

A new addition to the charliesangels.com family is our Charlie's Angels: Full Throttle pages. Yes, we have some cool photos and current news on the new movie soon to hit theaters this summer. Just click on the logo on the left of the page and get some action!

The three hour television special, ABC's 50th Anniversary was taped and will be telecast in May 2003 on ABC. (3/17)

Actress Farrah Fawcett was honored for her work in film at the Texas Film Hall of Fame Awards ceremonies in Austin, March 7, 2003. Fawcett was one of four inductees honored during the ceremonies. Woody Harrelson, Horton Foote and Tobe Hooper where also inducted. (3/17)
A Heavenly TV Land Awards

Well, Angels... Charlie's Angels two awards for the evening, Favorite Heard But Not Seen Character and Most Amazing Cast Cross-Over at the TV Land Awards which will air on March 12 on TV Land.

The evening will be filled with fun as all the yesteryear stars will shine once again! Such as Lee Majors, Penny Marshall, Cindy Williams, Be Arthur, Don Knotts, Mary Tyler Moore, David Cassidy and many more share the stage for the first TV Land Awards which will be aired on Wednesday, March 12 (9:00-11:00pm ET/PT) on both TV Land and Nick at Nite.

Tanya Roberts will be on hand at a few shows in the coming months! Here are the dates!