Here is a new book titled Action TV.  The book looks into the world of TV tough guys, smooth operators and of course Foxy Chicks.  The book includes a chapter on Charlie's Angels.

Well...all and all the cover is really cool with Fawcett in full "Angel" action.

The word on the street is that ABC and Sony Pictures Television are developing a new TV series based on Charlie's Angels TV series and feature film.  There is also a talk for a new TV version of  S.W.A.T.

It's been mentioned that Carlton Cuse ("Black Sash," "Nash Bridges") and John Wirth ("The District") are writing the script for the new version of Charlie's Angels and also executive produce.  Check back for updates.

Kate Jackson will be appearing on Hollywood Squares the week of February 23-27, 2004.  She will be on the show for the full week.

Check your local listings for times and channels in your area.

Farrah Fawcett loves a good joke as much as anybody, but the National Enquirer's recent story on her "romance" with comic Tom Green (Drew Barrymore's ex) was a joke gone too far. Farrah says she met Green two years ago with her publicist, and has never seen him since.

Farrah is, in reality, busy sifting through a mountain of film and TV offers. (Her "Bobbi Boland" stage effort ended prematurely, but I'm betting she'll tread the boards again.)

The actress will be in New York during Valentine's week, discussing "love" on a panel gathered for The Week magazine. Harold Evans, Erica Jong and Edmund White also give their thoughts on what makes the heart flutter. ~Liz Smith, Feb 9, 2004

The story line is: After Richie wins a date to the school dance with a Hollywood starlet (Ladd), he tries to tell his current girlfriend that she is not invited

The new issue of STAR magazine (March 8, 2004) showcases Farrah Fawcett on the cover for the magazines tasteless cover story "Scariest Makeovers." STAR looks at a number of well known Hollywood superstars and does a photo comparison. The story  including Kate Jackson, Farrah Fawcett, Madonna, Jessica Lange, Courtney Love, among others.

To be quite honest these woman are just as beautiful today as ever.

CharliesAngels.com staff would like to send the warmest Birthday wishes to Farrah Fawcett!

February 2, is this Angels Birthday! Farrah, you are ageless and oh so heavenly...have a great birthday month! And may all your wishes come true!

Dark Shadows Reunion reunties creator and executive producer Dan Curtis with many of the cast and production members to reminisce together and enjoy some of the program’s most memorable moments. The dvd includes the Q&A which was filmed here in Los Angeles for The Museum of Television & Radio.

Kate Jackson was one of the many Dark Shadow cast members to attend and be filmed for the event. 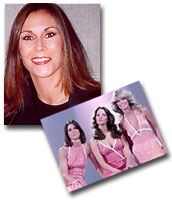 100s of fans came out this month to meet "the smart angel" Kate Jackson at the Hollywood Collectors Show in Los Angeles, CA.

Jackson was an true Angel with all of her fans taking photos and chatting with each one. Angel fan, Brian Thomas, asked Jackson were the photos of Kate, Jaclyn and Farrah (pictured) was taken. Jackson mentioned it was taken during a taping of the Captain & Tenille Show.

Jackson is also expected to have her own website online soon and she might be attending more signing shows in the future.  CharliesAngels.com will keep you posted where the heavenly angel will be!  For more photos of Jackson at the show please CLICK HERE

Ladd at NBC's All Star Party

The event was to promote to the press what will be happening this year on NBC.  Ladd is pictured here with NBC Entertainment President, Jeff Zucker.  Las Vegas airs Mondays on NBC @ 9pm (est/pst).

Well, I have not heard it from Sony but I'm SURE you the fans who have emailed Sony this past year made the studio produce the second season DVD!  That's some ANGEL POWER!!

Tanya Roberts told Rusty White from UGO some inside scoop on her upcoming projects.  She is now working on  two shows for cable TV. One is a golfing show and the other is a spoof on Battlestar Galactica with Richard Hatch for the Comedy Central network.

Tanya also mentions that she might be returning to That 70s Show now that her husband heath is improving.

For the first time, Kate Jackson will be attending the Hollywood Collector Show.  This is the same show Tanya Roberts did last year here in Hollywood.

The show showcases over 100 great stars and attracts thousands of fans. The cost to attend the show is $15 daily or $25 for two days and there is a fee for autographs.  The event is held at the Beverly Garland Holiday Inn, Studio City, CA on January 17th & 18th, 2004.

For more info go to:  http://www.hollywoodcollectorshow.com

PS>>>> Mike Pingel from charliesangels.com will be at the show selling some cool Angel collectables in one of the dealer rooms! Drop by the table and say "hi"!

Smith on The Love Boat

"A Tasteful Affair" stars Jaclyn Smith as Jeanette Brad-ford, a neglected young wife on a solitary cruise, tailed by a handsome private eye, Dennis Kingsley (Dennis Cole). But detective Dennis has trouble arranging professional and emotional priorities when he falls for the lady whose husband has hired him to catch Jeanette in a compromising situation.

The Trevor Project is a nonprofit endeavor created by the makers of TREVOR to promote tolerance for gay and questioning youth, and to aid in suicide prevention among that group. Statistics have shown that gay teens are three times more likely to attempt suicide than their heterosexual peers, and The Trevor Project hopes, through its efforts, to prevent some of those tragedies from occurring.

Farrah Fawcett soon after her play closed she was seen on The Today Show and also gave an interview for the New York Times regarding the closing of the play Bobbi Boland.

A Jackson's Fan Dreams For A Star

Bridget a huge Kate Jackson fan needs your help. She wants to raise enough money to buy Kate Jackson a star on the famous "Hollywood Walk of Fame!" --which is no easy task. Mainly due to the cost of such a heavenly feat! With the blessing of Ms. Jackson. Bridge now has raised $6,292 dollars. She has come a long way since our first report of $1,070)  But she need to raise $15,000 for Kate's star.  You go ANGEL!

Don't forget the holiday are coming and Bridge is selling calendars, bookmarkers, key chains, book plates. If you are interested in helping out with buying a product or just forking over some cold hard cash visit her website: Click HERE for the Site.  Any of her items would be great holiday gifts!!!

The comedy was in pre-views this past week and only had 7 performances.  Producer Joyce Johnson told Associated Press "The play simply does not work in a Broadway house.  This work debuted in a more intimate, off-Broadway theater some years back, which is where I first saw Bobbi Boland. The vivid characters that I saw in such a small setting did not transfer to the Cort. It's as simple as that."

Lori Boyles, is one lucky fan! She was able to see one of the preview performances and had this to say about Ms. Fawcett. "I was lucky enough to see Bobbi before it closed and even more lucky to meet Farrah at the stage door.  She was kind, gracious and so nice about meeting with the fans that had gathered at the stage door. She signed autographs, taking the time to personalize each item she signed and taking photos with the fans.  What an awesome lady!!!"

Jackson on The View Today

According to TV Guide website Kate Jackson is scheduled to be on Monday's episode (Dec 8, 2003) of "The View" on ABC. Check your local listings for time.

This year The Trever Project will be honoring Rosie  O'Donnell of the Trevor Life Award on December 7, 2003 in Los Angels, CA Also on hand will be Megan Mullally (Will & Grace), Lily Tomlin, Jennifer Coolidge (Legally Blond), Duncan Sheik and Queer Eye's Carson Kressley.

The Trevor Project is a nonprofit endeavor created by the makers of TREVOR to promote tolerance for gay and questioning youth, and to aid in suicide prevention among that group. Statistics have shown that gay teens are three times more likely to attempt suicide than their heterosexual peers, and The Trevor Project hopes, through its efforts, to prevent some of those tragedies from occurring.

CharliesAngels.com has donated a Charlie's Angels Basket for the event!  If your in Los Angeles and want a fun night out on the town tickets are still available. Tickets range from $85 dollars and up!