The drop dead funny Chico's Angles hit the stage again!  Chico's Angels Episode #1 "Pretty Chica's All In A Row" begins a new run in mid-Feb!  In this episode Chico's Angles go under the covers in the beauty pageant.

Also Episode #2 "Love Boat Chicas" comes back in late March and a brand new Episode #3 "Chicas In Chains" premieres in May 2005.

Pictured is Jaclyn in a sexy pink outfit seen in this weeks Kmart circular.

CharliesAngels.com staff would like to send the warmest Birthday wishes to Farrah Fawcett!

February 2, is this Angels Birthday! Farrah, you are ageless and oh so heavenly...have a great birthday month!  Happy Birthday Farrah!

Jaclyn Smith will be on tomorrows edition of the Oprah Winfrey Show on Thursday, Feb. 10, 2005  - check local listings for times in your area.

The show is called "Fabulous Without a Fortune"  Viewer will get a first look at Julia Roberts' new twins! Then, a star-studded challenge: can Daisy Fuentes give viewer moms celebrity chic for cheap? Jaclyn Smith goes on special assignment. And how to get Colin Cowie's million-dollar style for a whole lot less! Look fabulous, save money!

Bios on Farrah & Angels
This just in Angels....

Tomorrow (Jan 25) the Biography Channel is re-airing Farrah Fawcett's Biography at 7am & 1pm (PST) and it's followed by the Charlie's Angels Biography 8am & 2pm.

Check local listings for channels in your area. Enjoy!

One of our early Angelic Heaven Newsletters is currently being auctioned off on ebay.  I always find it fun to see past issues being auctioned.  And these newsletters are a bit rare, only 300 where made each month....

So here is your chance to bid on a Angelic Heaven classic item!   CLICK HERE for Auction

Cookout heats up on DVD

For those of you who missed it in theaters, Farrah's movie The Cookout is being released to DVD on January 18, 2004. Farrah is not pictured on the cover of the DVD.

In The Cookout, Todd Anderson is chosen as the #1 professional basketball draft pick and signs to play for his home team, the New Jersey Nets, for $30 million, he finds that his newfound wealth and buys a home in a stuffy white neighborhood. Where Farrah Fawcett plays one of the neighbors and the wife to the Judge played by Danny Glover.

Farrah Fawcett's The Burning Bed is coming to DVD on September 7, 2004.  CLICK HERE TO ORDER

In the movie Fawcett plays, Francine Huges who marries her small-town high-school sweetheart Mickey...only to discover his temper is short and his behavior, violent. Urged to hang in there by her family and a broken social welfare system, she suffers continuous abuse - until desperation leads her to cross a threshold from which neither she, nor her husband can ever return.

Fawcett's work in The Burning Bed earned her nominations for Best Actress for  EMMY and The Golden Globe. 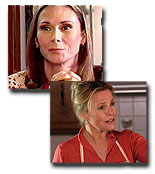 Here is a special holiday gift for you!  2 new angel movies this December on Lifetime TV!

First is Cheryl Ladd in Eve's Christmas on Monday, December 6th @ 9pm (est/pst) on Lifetime TV. In the film Ladd plays the mother to Eve. Eve is an unfulfilled ad executive who wakes up on Christmas and finds herself re-living her life - In her parents house and engaged to the man she ditched 12 years ago.

The long awaited Kate Jackson movie No Regrets will also air on Lifetime, Monday, December 27, @ 9pm EST/PST.  In the film, Film director Alex Wheeler wants to sort out his confusion over his relationships — past and present. His solution? Forget therapy. He'll just make a movie about the women in his life.

Pat O'Brien from The Insider & Entertainment Tonight has stolen 1st base in the race for the #1 South Dakota Bobblehead.

It's time for CA fans to let friends and family know to go vote for Cheryl Ladd.

The South Dakota minor league baseball team is planning a promotion for 2005 where they'll make Bobbleheads of some famous South Dakotan's.  The top 3 will win.

So Angel fans lets make a home run and VOTE for our favorite South Dakota Angel, Cheryl Ladd!  To vote go to: http://www.canariesbaseball.com

In the episode titled "Time Is On My Side" -  Red presses Eric to come up with a plan for his life, Eric decides he’s going to sell Donna’s engagement ring to fund taking a year off to hang out. But when he discovers Donna threw the ring off the water tower, the gang goes to try and find it and the results are disastrous. Meanwhile, Donna goes from being a redhead to a blonde and Bob has difficulty choosing between Midge (Roberts) and Pamela (Brooke Shields).

Chasing Farrah will be 6 episodes long with cameras chasing the 70s Angel from NYC to LA to her roots in Texas. The show will premiere on TVLAND January 18, 2005.

Hey Angel fans do you want to share your story on collecting Angels, meeting Angels or love of Charlie's Angels?  Well, Mike Pingel here at charliesangels.com is putting together a book called The Charlie's Angels Fan Yearbook 2004.

The book will showcase fans stories on their favorite angels.  The stories should be 500-1,200 words in length and a picture of yourself (maybe one with your collection or when you meet an angel!). Photo should be 300dpi and no bigger than 4x6.

The submissions deadline is NOW October 7, 2004.  One can email or mail in their stories and pictures to mike@charliesangels.com or address: Mike Pingel 1155 Hacienda Place #309 West Hollywood, CA 90069.  All who summit will have to sign and returned a release form.

PS: Thanks for all the wonderful submissions!  I know many of you are still working on yours -- get them in ASAP!