Chico's Angels are back in their episode 3 "Chicas in Chains."  Someone has been slashing up young hookers and the Angels are all to eager to put on fishnets and cha cha heels to catch the bad guys! Come join the Angels Kay Sedia, Chita Parol and Frieda Laye as they go under the covers to solve there next case.

The third season of Las Vegas with Cheryl Ladd is set to be released to DVD on September 12.

Cheryl Ladd appeared in the fifth season of Charmed in the episode "The Day the Magic Died" . . . season five of Charmed was released to DVD this past Tuesday.

Kate Jackson will be lending her voice to American Dad episode titled "Tears of a Clooney" - airing Sun May 14 09:30P on FOX

In the Season 2 ends, Francine's birthday brings back haunting memories of a celebrity film moment stolen by George Clooney, Francine's new dream is to destroy the star. But when she tries to win Clooney's heart with the intention of breaking it, Stan actually falls for him and sabotages the plan. Meanwhile back at home, Roger builds a vineyard and starts up a private sweat shop of foster children in the "Tears of a Clooney"

Jaclyn will be on Extra tonight (5/9/06) talking about her breast cancer scare & plus maybe some insight on a Charlie's Angels reunion??

Check your local listings for times and channels or go to http://extratv.warnerbros.com/.

Look at the Angels now... ooppss it's not Charlie's Angels its that funny cast of the play Chico's Angels in Los Angeles, CA.  Here is the current photo shoot done by Ken Knox for the upcoming play which is based on beloved cult classic episode "Angles In Chains"!

In the upcoming episode titled "Chaos Theory" Jillian (Cheryl Ladd) and Ed (James Caan) set off on a retreat that proves to be anything but peaceful while Danny (Josh Duhamel) and Mike (James Lesure) contend with a suspicious heavy hitter who wants to bet $1 million a hand.   Tune in on Friday, April 28, 2006 on NBC-TV to see Ladd's latest episode.

LOOKING AHEAD!!!  Ladd will be seen in the shows season final on Friday, May 12!

Until the end of the month one can bid on an original piece of art by Farrah Fawcett.   She donated her time and talent to this one of a kind "Mask"

This charity art auction of custom-created hand painted masks features over 500 masks by celebrities, sports figures, politicians, local and national artists, and recognized members of the community. Proceeds raised through the sale of masks and the gala event benefit patients and families served through Hospice of Metro Denver.

Kmart is showcasing a national "Spring" Sweepstakes which the grand prize is breakfast with Jaclyn Smith!   Which also includes a round trip ticket to LA, 2 night hotel stay!  ...or one can win the 1st Prize - Free Maid Service or 2nd Prize - Day Spa Certificate or 3rd Prize is Scott's Lawn Service!

This is an "In Store" promotion only! SO walk, run or put your angel wings on and FLY to your nearest Kmart store to sign UP!!!     ps: you must send us photos!

This month ALN airs two more of Farrah's appearances on Harry O.    The shows will air at both 5pm & 8pm (PST).  Episodes will be:

Cheryl Ladd is on Energy Times in which she is speaking out to raise menopause awareness.   http://www.energytimes.com/

Jaclyn Smith is on the Spring 2006 issue of Professional Woman's talking about business. http://www.professionalwomanmag.com/

Cheryl Ladd is now promoting a new skin cream for younger skin. To see the commercial online and buy some skin renewal system check out the website -  CLICK HERE.

Ladd was also featured in this past USA Weekend magazine.

On Friday, April 7 @ 9pm in the episode titled: "All Quiet On The Montecito Front."

This weekend on the Hallmark Channel will show the premiere of Cheryl Ladd's new film Though None Go With Me.  The film will air three times at 9pm, 11pm and 1am.

Jackson on the FAMILY GUY - Sunday

On the episode, Meg lands an internship with Mayor West (Adam West), Brian argues that he's corrupt. Determined to expose his shady ways, Brian and Stewie go undercover and discover  that Meg is in deeper than they thought. Meanwhile, a local talent show brings Peter  and Lois back to their folk singing days. Unfortunately, they also revert back to their  hippie ways and Chris must stage an intervention in the "Deep Throats" episode of  FAMILY GUY on Sunday, April 9 (9:00-9:30 PM ET/PT) on FOX.

Farrah is So Notorious

Farrah Fawcett makes her only appearance in this season of So Notorious starring Tori Spelling on VH1 tomorrow night, Sunday April 2 at 10pm (est/pst).

In the episode,  Fawcett plays herself as Spelling's next door neighbor, (which was true in real life!).  Fawcett comes over for a potato and finds herself in a middle of a impromptu party Spelling throws to impress a boy.

Entertainment Tonight will run a second spot on Cheryl Ladd with the interview by Mary Hart -- Tonight, Friday, March 31, 2006 -- check local listings for channels and times.

Tanya was a guest at this years TVLand Awards. Tanya looked smoking!   The awards show is currently running on the TVLand channel - check listings for times & dates.

Angel "mega" fan David Ross was able to take this great shot with her on the red carpet!

New Photos of Ladd
On April 8th, will be the premiere of Cheryl's new film “Though None Go With Me,” on Hallmark Channel.  Here is are two new shots of her from the film.  Check out the Hallmark Channel's website for a sneak peak  CLICK HERE

Farrah will be doing a ultra special live Q&A at the Screen Actors Guild in Los Angeles, this Tuesday, March 28 from 7-9pm.

Farrah will taking question from audience members.  The show has been sold out for weeks and one must be SAG member, but you might be able to catch a look at the heavenly angel!

Then on Friday, April 7 @ 9pm in the episode titled: "All Quiet On The Montecito Front."  Jillian (Cheryl Ladd), the matchmaker decides to fly Delinda's (Molly Sims) college beau Dr. Derek (Shawn Christian) in as a surprise.

Smith on the Insider

Jaclyn Smith will be seen Tomorrow, March 7th on the INSIDER.  She will host a fashion show featuring her K-Mart collection.  Check local listings.

Also Smith will be on the cover of the March 2006 issue of Professional Woman's Magazine.  She will be featured on the cover an inside with a feature story.  The magazine hits newsstands on March 15th.

Then on June 20th, Smith will be featured in the Woman's Day: "Budget Decorating Ideas" issue.  The article inside will feature her home and her "Jaclyn Smith Home" collections.

First shots of Ladd's Movie
Cheryl Ladd stars as Elizabeth Bishop, a woman who never loses her faith and inner strength, no matter what tragedies await, in the film adaptation of Jerry Jenkins’ acclaimed novel “Though None Go With Me,” a Hallmark Channel Original movie premiering on Saturday, April 8 (9/8c). 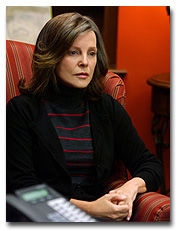 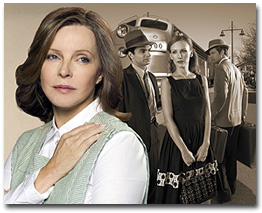