Boycott PEOPLE magazine
Get this, People Weekly editor, Larry Hacket, has been quoted in a NEW YORK TIMES  article about what makes a hot selling People's magazine cover.  Hacket said:

“We’re also on Farrah watch." he said. "At this point, Farrah has to die; it's the only cover left for her.”

It is a sick statement and a true refection on how magazines/tabloids uses celebrities images, relationships, health issues, family issues, etc  to sell their magazines.

To openly say this is the last cover for Farrah is upsetting and disgusting. I personally hope Farrah rallies and starts kicking some ass.  Until that happens, STOP BUYING  PEOPLE MAGAZINE & OTHER TABLOIDS.

I understand many of us are collectors but we need to send a message to the publishers such as Hacket and other that they can not treat our Angel  this way and then expect us to give them our hard earned money.  ~ Mike Pingel

Jaclyn Smith and her Designer Team! 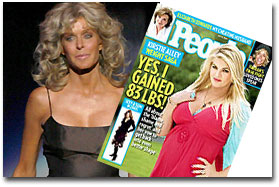 This week in People (5/08/09) magazine has run a heart breaking story on Farrah's condition.

I have received many calls and emails about how Farrah is doing.  I know Farrah is still fighting the fight of her life and I know she feels all of you're thoughts and prayers.

I know all of you love her so deeply.  Please keep sending positive thoughts to help the universe speed up her recovery.

Tonight take out you're favorite Farrah film or Charlie's Angels episode.  Her beautiful smile and heavenly voice is so heart warming and will help, it's has helped me.

Farrah sues over her poster

If you want to read the entire "lawsuit"  brief pages go to RadarOnline.com.

Craig Nevius confirmed early Monday with Erin Carlson of the Associated Press that Farrah is "not on Death's Door." but is in the hospital because of a blood clot that was likely a side effect of treatment she recently had in Germany.  Nevius says in a phone interview, "She's doing fantastic" and "She's not going anywhere anytime soon."

Farrah is doing fine.  I know these reports are disturbing but most of the time they are false and have a huge spin on them to sell papers.

Farrah Upset with paparazzi
Farrah Fawcett is outraged about the paparazzi after taking pictures of her in wheelchair.  She feels the paparazzi needs to be scared themselves and their actions are effecting her recovery.   If the video does not play: CLICK HERE FOR THE VIDEO

UK story on Farrah is FALSE

Hey all, just an FYI on this horrible story which was released  today, 3/1/09 in the UK Daily Mirror newspaper saying Farrah saying her last goodbyes is completely false.

The story is filled with untruths!  Please believe me that she is doing well. Thank you, Mike Pingel 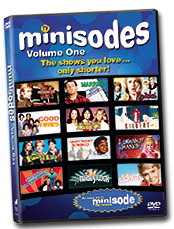 This week a new DVD will be released from Sony Home Entertainment with the Charlie's Angels Minisodes on it!!!   Now my contacts at the studio do not have any idea where this well be released.  Currently they think in grocery stores!!  O,K, angels time to go to work...if you see this dvd for sale LET US KNOW!!!  mike@charliesangels.com

UPDATE: I got word from Sony they were not sure if this DVD was out yet.  Still no word where it will turn up. 4/29/09

Kate Jackson is guest starring on a new Sci-Fi series.  She is shooting now!  More to come!

Our store has new photos for sale!! Check it out!  CLICK HERE 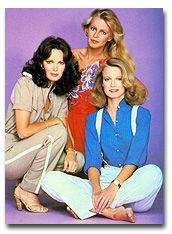 Yes it's TRUE!! It will be announced official on Tuesday (but many dvd stores released the announcement early) that Sony is releasing Season 4 of Charlie's Angels with that years new angel, Shelley Hack on July 21, 2009!!!

Season four was the year when the "Charlie" girl Shelley Hack became Tiffiany Welles and replaced Kate Jackson.  This was also the final year that Farrah Fawcett was seen on the series for her last three cases.

The year was filled with fun episodes as "The Love Boat Angels," "Toni's Boys,"  "Fallen Angel," "Angels Go Truckin'" and a few dramatic episodes as "Caged Angels" and "Avenging Angel."

The cover of the DVD will be out soon so check back!!!

Farrah's Story to air May 15 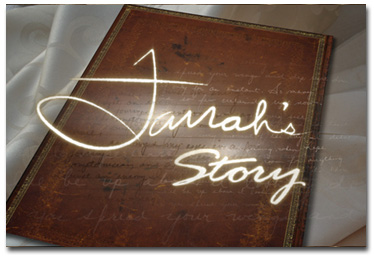 "I've never understood why people are interested in anything that I do. Until now." Fawcett said. "As much as I would have liked to have kept my cancer private, I now realize that I have a certain responsibility to those who are fighting their own fights and may be able to benefit from learning about mine.

NBC will air "Farrah's Story" on  Friday, May 15 from 9-11 PM ET, NBC News will introduce viewers to the Farrah Fawcett who is a fighter with an extremely personal look at her battle with cancer. Shot with her own home video recorder,

"Farrah's Story" chronicles the actress' two and half year battle with cancer. Intensely intimate and emotional, the footage becomes Farrah's video diary in which she not only shares her thoughts and feelings but also her treatments in the U.S. and Germany. This is Farrah Fawcett's story in her own words as she explains her battle and her journey with cancer, and it is her narration that tells this story.

"This film is very personal," Fawcett said during filming. "At the time, I didn't know if anybody would ever see it. But at some point, the footage took on a life of its own and dictated that it be seen.

Close friends & former Angels, Jaclyn Smith, Kate Jackson, as her father Jim Fawcett will be seen in the documentary. 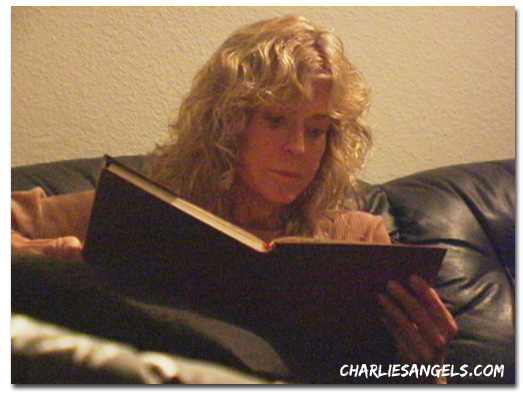 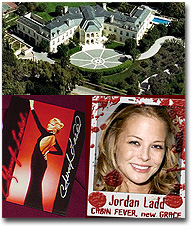 Candy Spelling has put up the Spelling Manor in Beverly Hills for sale!  Oh YES!!! You can own Aaron's home for a tiny amount only $150 million dollars!  The French chateau-style mansion has 56,500 square feet of space on more than 4.6 acres and is the largest home in Los Angeles County.

Jordan Ladd will be at Fangoria's Weekend of Hell in Los Angeles on April 17-19.  Jordan is the daughter of Cheryl Ladd.  Jordan played Kris Munroe in a flash back on Charlie's Angels in the episode: "Angel on My Mind" !!  To check out the Fangoria website  CLICK HERE

Talking about Cheryl Ladd!  Check out Ladd's new website and all the new cool things Cheryl is selling!  She has her blue satin jackets signed & for sale!  She also has sunglasses, new 8x10s and even her "Annie Get Your Gun" fan for sale!  CLICK HERE @ www.cherylladd.com to see her site. 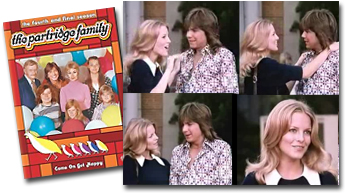 During this season Cheryl Ladd guest stars in the episode "Double Trouble".

Ladd plays Joanna, the popular girl who needs a date for the beach party and asks Keith Partridge.  He accepts but has to break is first date.

Jaclyn is found this month on the cover of Guideposts. You can read the story online CLICK HERE.

The film tells the stirring drama tells the story of Florence Nightingale, a nurse who fought to improve medical healthcare during the Victorian Era. She toiled endlessly to reform hospital sanitation and, ultimately, helped to define the nursing profession as it is known today. After volunteering in Scutari (Istanbul) to care for wounded soldiers during the Crimean War, Nightingale was scorned by the establishment and faced great opposition for her new way of thinking. However, through her selfless acts of caring, she quickly became known as “The Lady with the Lamp,” the caring nurse who made her rounds night and day to minister to the sick and less fortunate.

Bravo has announced the pick-up for a third season of the hit series Shear Genius.   Open calls for stylists interested in competing in the high-stakes hair-cutting competition series will be held in cities across the country starting this week. For more information on casting, go to www.bravotv.com/casting.

No mention in the press releases if Jaclyn Smith will return as the host for the third season of Shear Genius.

Shelley Hack will be on hand at the Hollywood Collectors Show on July 18 & 19 in Burbank, CA!

"I'm so into it," Barrymore said while promoting her new star-filled romantic comedy, He's Just Not That Into You. "I’m so into it—Charlie's Angels III!" 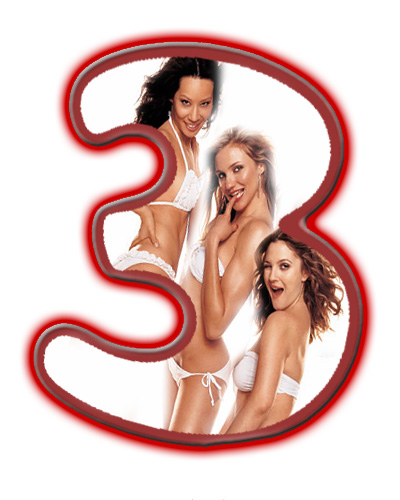 "It's percolating up," said Nancy Juvonen, Barrymore's Flower Films producing partner. "It's rising to the surface."

Ideas are being kicked around, including the possible introduction of a fourth Angel and "NEW" a bad villain! 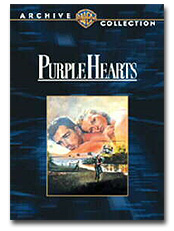 This week, Warner Brothers online released Cheryl Ladd's film Purple Hearts for the first time on DVD. The film is also available in a download format. It's $19.99 for DVD or $14.99 with download.

In the carnage and cruelty of Vietnam, Navy surgeon Don Jardian learned he had to move fast to deal with black marketeers who control vital supplies and even faster to stitch together a shrapnel-riddled combatant. But he couldn't foresee the emotional crossfire he and nurse Deborah Solomon experience as their romance and the war's dangers heighten. Ken Wahl (Wiseguy) and Cheryl Ladd (Charlie's Angels) star in director Sidney J. Furie's vivid and moving Purple Hearts, a Vietnam War drama of love and courage showcasing fine performances and authentic Philippines-filmed recreations of the hell-on-earth that was Vietnam. In love and war, their story makes for an exciting powerful film about a conflict in which there were no easy answers.

The lunchbox showcases Farrah Fawcett, Kate Jackson & Jaclyn Smith!  It also comes with the first season of the series.  The box set has nothing different on it and the packaging is the same.  The lunchbox has the same image on the front and back. 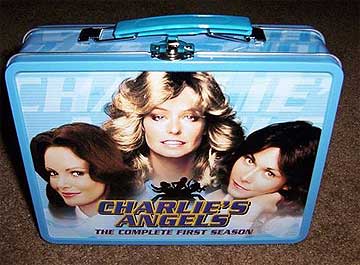 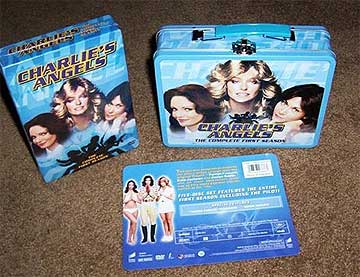 Ladd's estate up for sale 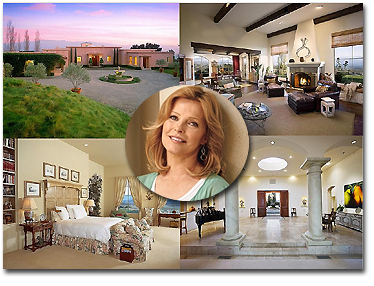 Our Angel, Cheryl Ladd's European Inspired Country Estate on 22 Santa Ynez Valley Acres is up for sale for $5,795,000.

Her home is situated within a private enclave in a highly coveted area of this wine country haven, the approx. 7,000 sq.ft. custom designed home has luxurious ambiance yet blends formal and casual living artfully.  For more images click here 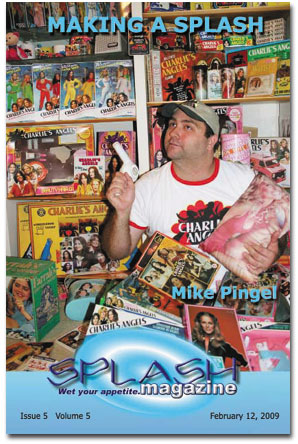 Angel Jaclyn & Kmart
Here is a look into the world of Jaclyn Smith photo shoot for her Kmart line!  She looks soooo HEAVENLY!!

Farrah Fawcett has been reported to be hospitalized.  Our prayers are with her always.

Tomorrow night Sunday, April 5 at 1am (Monday morning) Fox Movie channel (FXM) will air the Cheryl Ladd's film, The Marriage of a Young Stockbroker from 1971 in which Ladd has a small bit part in the background.

Candy Spelling has just released her new book Stories from Candland. From her book: "The attic houses various sizes of tapes and DVDs of every television show and movie my husband ever made, plus extra scripts, notes, photos, memorabilia (anyone for a 90210 lunchbox or a Vega$ poker chip, a Charmed book bag or a cast portrait of Charlie’s Angels?)".

Tori Spelling's new book Motherwood is to be on shelves on April 14.

Model Family
Jamie Kennedy plays the ugly duckling in this MODEL FAMILY with Cheryl Ladd as his mother and John Schneider as the father.  Very FUNNY! :)


A February episode of "Robot Chicken" did a very brief satire/spoof on Charlie's Angels. (this is not for the faint of heart!).  Here is the short video! The video is rated:  TVMA.