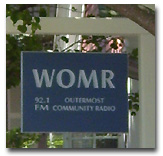 Mike Pingel will be a guest on "Arts Week with Tom & Andy and the Poets Corner" on Provincetown WOMR.

Ladd's New Commercial
Cheryl Ladd is the new spokesperson for Prilosec.  She has a new commercial currently running on the TV and was seen in Sunday's coupon supplement. 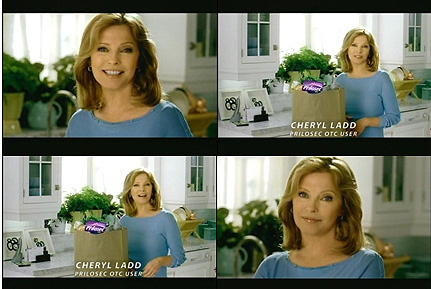 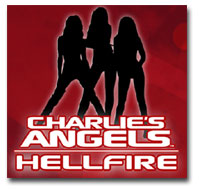 Players can choose form 3 Angels and fight through 16 action-packed levels.  The main goal is to eliminated all other leaders of the criminal organization, every fourth level feature a "Boss" to be defeated.  The Angels face three minor bosses and one main boss.  There are four chapters each featuring its own scenery.

Images of the Mobile Game: 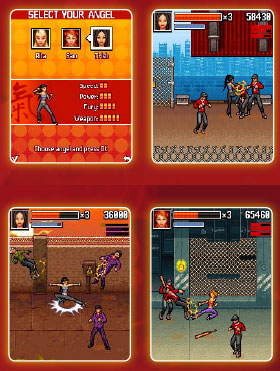 Angel FYI -- There was an original mobile game produced in April 2002.  The game was called Charlie's Angels Mobile Adventure and was produced for the Z700 color phone.

Farrah records had leaked to the press by an employee at UCLA were she was receiving treatments for her first battles with cancer.  The employee has been fired by UCLA.

Just recently Britney Spears UCLA medical records have also been leaked to the tabloids and the LA Times reports that 'UCLA has fired 13 employees and disciplining 12 others for improperly accessing Spears' electronic files while she was treated in its psychiatric hospital.'

There is no final deal or air date for the documentary "A Wing and a Prayer".

Shear Genius "Hair From Heaven"
Kate Jackson's Shear Genius episode will air on Bravo on July 30 @ 10pm est/pst.  The evening contest will be re-creating the "Charlie's Angels"  notable looks from that '70s show.

Here are some photos from the upcoming episode!  Enjoy!  Thanks a million Bravo. 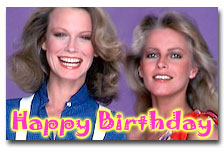 It's time to send Happy Birthday Wishes out to two Angels, Shelley Hack and Cheryl Ladd. Hack's birthday is on July 6th and Ladd's is July 12!

Pingel Book Signing
Mike Pingel will  be signing his new book "The Q Guide To Charlie's Angels" in Los Angeles will be on Friday, July 11 @ 7:30pm at the Different Light Bookstore (8853 Santa Monica Blvd, West Hollywood )

Below is a picture of the "Charlie's Angels" window at Different Light Bookstore!  It's a full window celebrating the new book, the Angels and showcasing many of his collectibles!!  Hope to see you that evening! 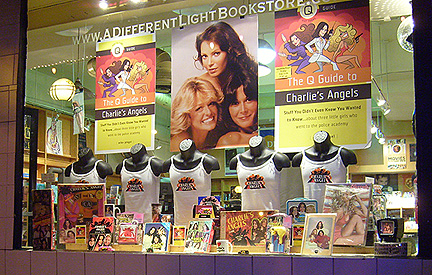 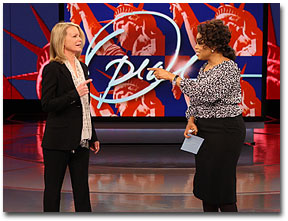 For those of you who missed this the first time around, Shelley Hack's appearance on Oprah is supposed to be re-airing on Wednesday, July 2.

Check  out your local TV Listings for channel and time of airing. 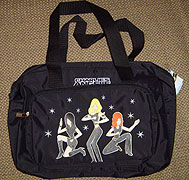 Just in our Angelic Heaven Store are some very cool purses, t-shirts and a few other  items!

There will be vintage and new items posted in the store in the coming weeks.  Check these out fast and buy them ASAP because there are only one of each new item!!!!  OH MY ANGELS!!

Ladd's new AD
Cheryl Ladd is featured in a new Prilosec ad.  The ad can be found in the July 2008 issue of Country Living. 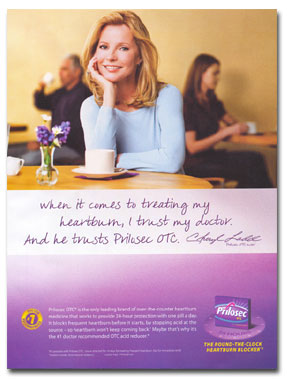 The Angels have shown up on the cover of the UK magazine "TV Film Memorabilia"  The issue has a story showcasing leading ladies!

Not sure if this issue is available in the US but it has shown up on EBAY already!  (3/08)

The film about a pediatrician by day, single mom by night, SARAH (Ladd) invites her estranged husband, PETE (Barry Bostwick), back to their suburban home for the Holidays on one condition: he must reconcile with their daughters before she agrees to finalize a trial separation with divorce.

Jaclyn Smith with be appearing on The Morning Show with Mike and Juliet on Wednesday, June 25.

Also, in the June 30, 2008 issue of OK magazine, there is a 2-page spread for "Shear Genius", along with a small picture of Jaclyn in the TV section. Angelina Jolie is on the cover of the magazine.

Jaclyn Smith will be all over next week promoting the season premiere of Shear Genius.

This week she is in the new TV Guide  (June 23-25, 2008) chatting about the show and revels that Kate Jackson will be the surprise Angel on the show!!

Next week Jaclyn Smith will be appearing on the Today Show on NBC, on  Tuesday, June 24.

The show premieres on Wednesdays, June 25 on Bravo @ 10pm (est/pst) 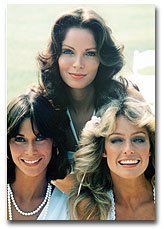 Jaclyn Smith told Entertainment Tonight, "You will be surprised when you see it," Jaclyn says. "We recreate our styles from the '70s with a modern touch. I thought it was challenging, because you think the simplicity of those styles. I think having some 'Angels' there was intimidating to some of the stylists. I think it was harder for them than just recreating [the hair styles] because we were there."

The show will have the battle of the Angel hair as Smith's has a special guest appearance of an Angel to judge the event.  The second season of "Shear Genius" premieres June 25 at 10 p.m. on Bravo. 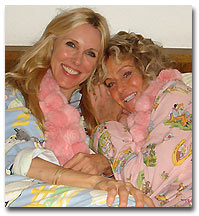 Many don't know but Farrah Fawcett loves her SleepyHead.com PJs!!!

Here is a recent heavenly picture of Farrah & her gal pal Alana Stewart having a all-girls night sleepover in their SleepyHead.com Pajamas!!

You too can get a pair just like Farrah!!! Go to http://www.sleepyheads.com/  -- tell them CharliesAngels.com sent you!

..and a rumor of a Charlie's Angels co-star to make a guest appearance on the series this year!!!

Ladd has finished filming Baggage which is an independent feature film and will be coming to a theater near you soon!

Cheryl Ladd's show "Las Vegas" has been canceled and will not be retuning next season!

If you have not seen the final episode, the second part of "Three Weddings"  has Ladd throughout the show!  Check it out at NBC.com.  (3/08) 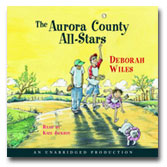 Kate Jackson has lent her voice to the audio reading of the book "The Aurora County All-Stars by Deborah Wiles.  The audio book is 5 hours and 37 min and is available for download or on CD!

The story is about a twelve-year-old House Jackson, star pitcher and team captain of the Aurora County All-Stars, has been sidelined for a whole sorry year with a broken elbow. He's finally ready to play - but wouldn't you know, the team's only game of the year has been scheduled for the exact same time as the town's 200th-anniversary pageant. Now House must face the pageant's director, full-of-herself Frances Shotz (his nemesis and perpetrator of the elbow break), and get his team out of this mess. There's also the matter of a mysterious old recluse who has died and left House a wheezy old dog named Eudora Welty and a puzzling book of poetry by someone named Walt Whitman.